It is our privilege to publish these excerpts from Leonard Ravenhill's powerful first book WHY REVIVAL TARRIES. Although the title of this article is also the title of chapter four of the book, we have taken some sections from other chapters as well. (We have also included most of the forward to the book written by Mr. Ravenhill's close friend, the late Dr. A. W. Tozer.) We thank God for how He has used this book in our lives, and in the lives, and in the lives of so many others, to reveal God's burning heart of love towards His Church. We pray that you too, will feel the flames...

Great industrial concerns have in their employ men who are needed only when there is a breakdown somewhere. When something goes wrong with the machinery, these men spring into action to locate and remove the trouble and get the machinery rolling again. For these men a smoothly operating system has no interest. They are specialists concerned with trouble and how to find and correct it.

In the Kingdom of God things are not too different. God has always had His specialists whose chief concern has been the moral breakdown, the decline in the spiritual health of the nation or the Church. Such men were Elijah, Jeremiah, Malachi, and others of their kind who appeared at critical moments in history to reprove, rebuke, and exhort in the name of God and righteousness.

A thousand or ten thousand ordinary priests or pastors or teachers could labor quietly on, almost unnoticed, while the spiritual life of Israel or the Church was normal. But let the people of God go astray from the paths of truth, and immediately the specialist appeared almost out of nowhere. His instinct for trouble brought him to the help of the Lord and of Israel.

Such a man was likely to be drastic, radical, possibly at times violent, and the curious crowd that gathered to watch him work soon branded him as extreme, fanatical, negative. And in a sense they were right. He was single-minded, severe, fearless, as these were the qualities the circumstances demanded. He shocked some, frightened others, and alienated not a few, but he knew Who had called him and what he was sent to do. His ministry was geared to the emergency, and that fact marked him out as different, a man apart.

To such men as this the Church owes a debt too heavy to pay. The curious thing is that She seldom tries to pay him while he lives, but the next generation builds his sepulcher and writes his biography, as if instinctively and awkwardly to discharge an obligation the previous generation to a large extent ignored.

Such a man as this is not an easy companion. The professional evangelist who leaves the wrought-up meeting as soon as it ends to hurry over to the most expensive restaurant to feast and crack jokes with his sponsors will find this man something of an embarrassment, for he cannot turn off the burden of the Holy Ghost as one would turn off a faucet. He insists upon being a Christian all the time, everywhere; and again, that marks him out as different.

Toward him it is impossible to be neutral. His acquaintances are divided pretty neatly into two classes, those who love him with all admiration, and those who hate him with perfect hatred! -A.W. Tozer

(From the forward to WHY REVIVAL TARRIES)

"When we go to God by prayer, the devil knows we go to fetch strength against him ,and therefore he opposeth us all he can." -R. Sibbes

To the question, "Where is the Lord God of Elijah?" we answer, "Where He has always been-on the throne!" But where are the Elijahs of God? We know Elijah was "a man of like passions as we are," but alas! we are not men of like prayer as he was. One praying man stands as a majority with God! Today God is bypassing men - not because they are too ignorant, but because they are too self-sufficient. Brethren, our abilities are our handicaps, and our talents our stumbling blocks!

Out of obscurity, Elijah came on to the Old Testament stage, a full-grown man. Queen Jezebel, that daughter of hell, had routed the priests of God and replaced them with groves to false deities. Darkness covered the land and gross darkness the people, and they were drinking iniquity like water. Every day the land, fouled with heathen temples and idolatrous rites, saw smoke curling from a thousand cruel altars.

Elijah lived with God. He thought about the nation's sin like God; he grieved over sin like God; he spoke against sin like God. He was all passion in his prayers and passionate in his denunciation of evil in the land. He had no smooth preaching. Passion fired his preaching, and his words were on the hearts of men as molten metal on their flesh.

Brethren, if we will do God's work in God's way, at God's time, with God's power, we shall have God's blessing and the devil's curses. When God opens the windows of heaven to bless us, the devil will open the doors of hell to blast us. God's smile means the devil's frown! Mere preachers may help anybody and hurt nobody; but prophets will stir everybody and madden somebody. The preacher may go with the crowd; the prophet goes against it. A man freed, fired, and filled with God will be branded unpatriotic because he speaks against his nation's sins; unkind because his tongue is a two-edged sword; unbalanced because the weight of preaching opinion is against him. Preachers make pulpits famous; prophets make prisons famous. The preacher will be heralded; the prophet hounded.

Ah! brother preachers, we love the old saints, missionaries, martyrs, reformers: our Luthers, Bunyans, Wesleys, Asburys, etc. We will write their biographies, reverence their memories, frame their epitaphs, and build their monuments. We will do anything except imitate them. We cherish the last drop of their blood, but watch carefully the first drop of our own!

We try to help God out of difficulties. Remember how Abraham tried to do this, and to this day the earth is cursed with his folly because of Ishmael. On the other hand, Elijah made it as difficult as he could for the Lord. He wanted fire, but yet he soaked the sacrifice with water! God loves such holy boldness in our prayers. "Ask of Me, and I shall give thee the heathen for thine inheritance, and the uttermost parts of the earth for thy possession." (Psalm 2:8)

Oh, my ministering brethren! Much of our praying is but giving God advice. Our praying is discolored with ambition, either for ourselves or for our denomination. Perish the thought! Our goal must be God alone. It is His honor that is defiled, His blessed Son who is ignored, His laws broken, His name profaned, His book forgotten, His house made a circus of social efforts.

Does God ever need more patience with His people than when they are "praying"? We tell Him what to do and then how to do it. We pass judgments and make appreciations in our prayers. In short, we do everything except pray! No Bible school can teach us this art. What Bible school has "prayer" on its curriculum? The most important thing a man can study is the prayer part of the book. But where is this taught? Let us strip off the last bandage and declare that many of our presidents and teachers do not pray, shed no tears, know no travail. Can they teach what they do not know?

The man who can get believers to praying would, under God, usher in the greatest revival that the world has ever known. There is no fault in God. He is able. God "is able to do according to the power that worketh in us." God's problem today is not communism, nor yet Romanism, nor liberalism, nor modernism. God's problem is - dead fundamentalism!

This generation of preachers is responsible for this generation of sinners. At the very doors of our churches are the masses - unwon because they are unreached, unreached because they are unloved. Thank God for all that is being done for missions overseas. Yet it is strangely true that we can get more "apparent" concern for people across the world than for our perishing neighbors across the street! With all our mass-evangelism, souls are won only in hundreds. Let an atom bomb come and they will fall by the millions into hell.

Sin today is both glamorized and popularized, thrown into the ear by radio, thrown into the eye by television, and splashed on popular magazine covers. Churchgoers, sermon-sick and teaching-tired, leave the meeting as they entered it - visionless and passionless! Oh God, give this perishing generation ten thousand John the Baptists!

Just as Moses could not mistake the sight of the burning bush, so a nation could not mistake the sight of a burning man! God meets fire with fire. John the Baptist was a new man with a new message. As a man accused of murder hears the dread cry of the judge, "Guilty!" and pales at it, so the crowd heard John's cry, "Repent!" until it rang down the corridors of their minds, stirred memory, bowed the conscience and brought them terror-stricken to repentance and baptism! After Pentecost, the onslaught of Peter, fresh from his fiery baptism of the Spirit, shook the crowd until as one man they cried out: "Men and brethren, what shall we do?" Imagine someone telling these sin-stricken men, "Just sign a card! Attend church regularly! Pay your tithes!" No! A thousand times no!

"Oh, my God! If in our cultivated unbelief and our theological twilight and our spiritual powerlessness, we have grieved and are continuing to grieve Thy Holy Spirit, then in mercy spew us out of Thy mouth! If Thou cannot do something with us and through us, then please God, do something without us! Bypass us, and take up a people who have not yet known Thee!" 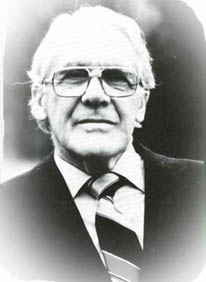 Leonard Ravenhill was a powerful preacher and author of many stirring books, including the classic, "Why Revival Tarries." Formerly one of England's outstanding evangelists, he went to be with the Lord on Thanksgiving Day weekend 1994.

Read More of his articles

This article is used with permission from Last Days Ministries: https://www.lastdaysministries.org